In South Korea, new types of commercial activities such as franchising, factoring, and leasing have already spread throughout the industry and become commonplace. In particular, more than 5,000 franchise headquarters and over 250,000 franchisees do business with franchises in Korea, which is in line with the nation’s industrial structure, where the self-employment rate is high (e.g. 25.1% in 2018).

Korea’s FAIR TRANSACTIONS IN FRANCHISE BUSINESS ACT (hereafter “Korean Franchise Law”), similar to the United States and China, stipulates that an ‘information disclosure statement’ must be registered in advance with a national institution. The contents are similar in that the general status of the franchise headquarters, the outline of the franchise business, and the expenses of the franchisees.

However, Korean franchise laws protect franchisees in a stronger way than other countries’ laws. This can be seen in the same context as the Korean Fair Trade Act being more weighted on the aspect of fair trade than on the aspect of monopoly regulation.

We introduce below the legislative background and main content on some of Korea’s strong protection systems. 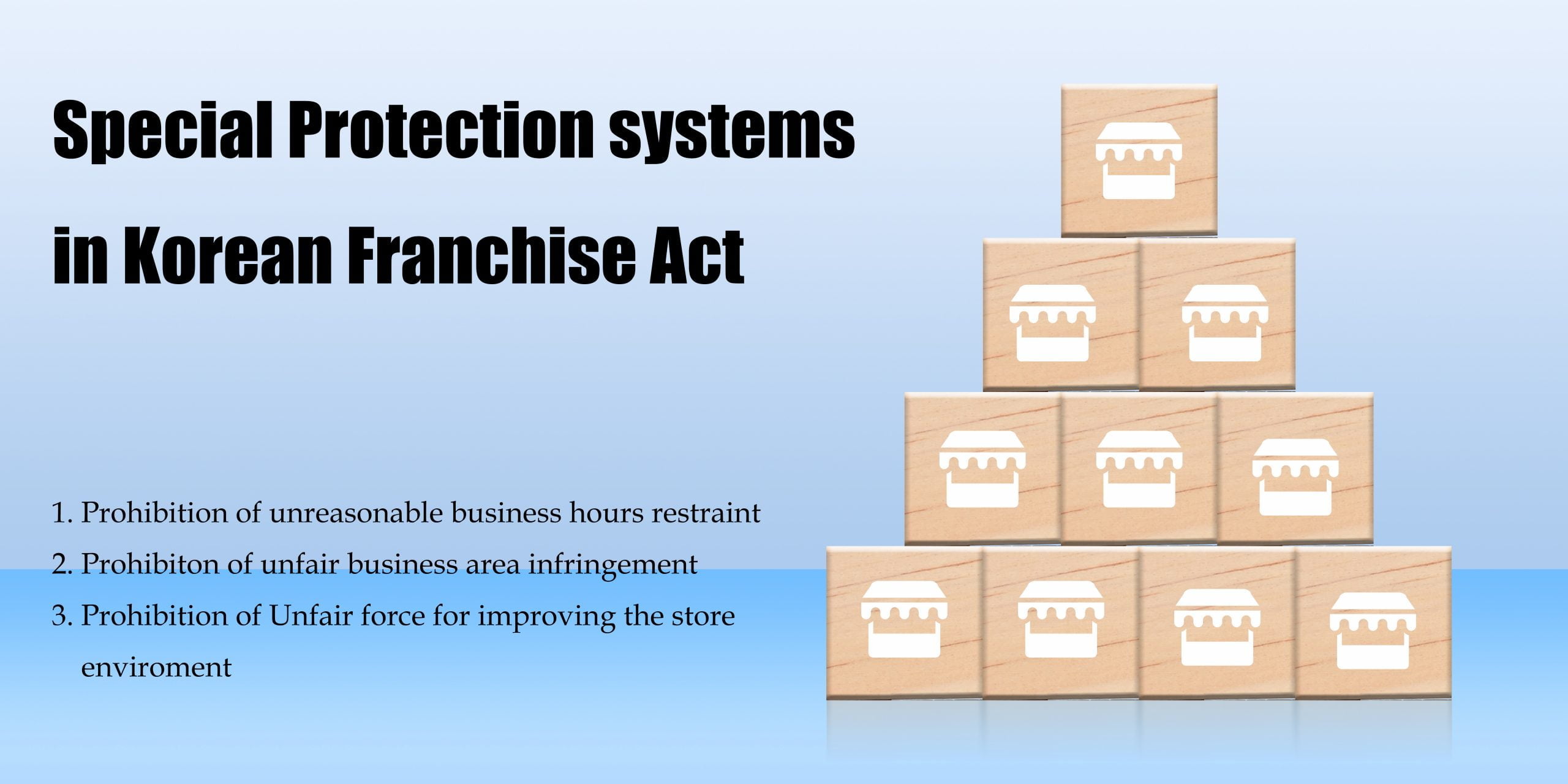 This regulation was enacted in 2013, and there is a tragic event behind it. A franchisee who operated a convenience store franchise that had a 24-hour business policy committed suicide one after another after suffering from sluggish sales while suffering from forced late-night operation and a huge penalty for arbitrarily closing business. Therefore, a protective measure was created through legislation that operation is not required for the night business hours with low sales.

2. ‘Prohibition of unfair business area infringement’ as stipulated in Korean Franchise Law Article 12-4 of the above ACT.

From the case of Coca-Cola, which is often mentioned as the first case of franchising, in fact, it seems that the nature of regional patent rights was strong. However, the Korean Franchise Law enacted in Korea in 2002 only prohibited the act of restricting the business area of specific franchisees, but there was no provision to guarantee the business area. This is because, from the standpoint of ‘monopoly regulation’, intra-brand competition restrictions will have a stronger monopoly effect than non-brand competition restrictions for so-called high-profile brands.

However, after the enactment of the Korean Franchise Law in 2002, there have been frequent cases of franchise headquarters opening directly managed stores near existing franchisees or opening additional franchisees. Even though these activities may strengthen the brand power, from the point of view of franchisees, the sales immediately fell sharply, which became an excuse for disputes.

In the end, the Fair-Trade Commission made it impossible to install directly managed stores or franchisees within a few hundred meters of existing franchisees (this was determined differently for each brand type) in the form of an autonomous discipline called ‘best practice standards’. When signing a contract, it was forced to specify a certain business area in advance and specify it in the contract.

In other words, the franchisor cannot request for environmental improvement of the store unless the store’s facilities are objectively obsolete or normal operation is difficult due to sanitation or safety defects. Even if the franchisee shall improve the environment under the Article, the Franchisor should be responsible for some fees of the sign and interior.

Above, we have reviewed some of the franchisee protection systems implemented in South Korea. All of these regulations were legislated in 2013 and have now become the main system of the Franchise Business Act in Korea. It is true that there have been criticisms that the regulation is somewhat excessive compared to foreign legislation. Franchisees should not be treated unfairly, but from the long-term perspective of the development or growth of the brand as a whole, I think there is still room for improvement.

If you have any questions, please contact our Franchise Law specialist Attorney Junghwan Park.