Legal effect and validity of a will created in Korea

Lately, we have been receiving an increasing number of inquiries about inheritance and wills in Korea. In response to this, PLO has decided to issue another mini-series of articles, addressing the most common concerns of expats in Korea.

The first article will be about whether a will composed in Korea has legal effect or not.

I. Legal effect of a will created in Korea

Article 50 of the Act on Private International Law governs will-related matters as follows:

(1) A will shall be governed by the law of nationality of the testator at the time of the will.

(3) The method of a will shall be governed by one of the laws in the following subparagraphs:

According to the above provision, the general principle is that when a foreigner makes a will in Korea, it will be regulated by the law of nationality of the foreigner (lex patriae). Moreover, when changes are made to the already existing will or if it gets canceled, the same rule applies. However, in some cases, Korean law can and will be the law applicable to the ‘method of will’. Such exceptions include cases when the will was created in Korea, the testator was residing in Korea at the moment of his or her death or the will concerns real estate property located on the territory of Korea.

In other words, if a foreigner was in Korea at the moment of will’s creation or that foreigner’s death, or else if the will specifies a real estate property located in Korea, the Korean law will apply to the ‘method of will’. This, in turn, means that unless the ‘method of a will’ follows one of the 5 methods below that are provided by the Korean law, it will not have any legal effect.

Most of our foreign clients do not know this and tend to think that it is the law of their country that will apply to their will’s creation, not the law of Korea. However, it is a big mistake to think that.

II. The 5 methods of will creation, according to the Korean Civil Act.

The Korean Civil Act provides a detailed set of rules governing the forms of will and conditions of its validity, as shown below.

No will shall take effect unless he is in conformity with the formality stipulated by this Act.

There shall be five forms of wills as follows: holograph document, sound recording, notarial and secret documents and instrument of dictation.

Article 1066 (Will by Holograph Document)

(1) In order to make a will by holograph document, the testator must write with his own handwriting the whole text, the date, the domicile and his full name, and must affix his seal thereto.

(2) In order to make any insertion, deletion or other alteration of letters in a holograph mentioned in paragraph (1), such correction must be made in the testator’s own handwriting and affix his seal thereto.

Article 1067 (Will by Sound Recording)

Article 1068 (Will by Notarial Document)

In order to make a will by a notarial document, the testator must orally state the tenor of his will before a notary, in the presence of two witnesses and the notary must write down and read it, and then the testator and each of the witness must affix their signature or names, and seals to the writing after acknowledging it to be due and correct.

Article 1069 (Will by Secret Document)

(1) In order to make a will by a secret document, the testator must close up the document on which the writer’s full name was written and affix his seal thereto, and after the testator has produced the sealed document before at least two witnesses and declares that it is his testamentary document, the date of the production of the document must be written on the sealed cover, and then the testator and the witnesses must affix their signatures or names and seals thereto.

(2) A closed document of a will prepared in compliance with the forms mentioned in paragraph (1) must be submitted to a notary or the court clerk within five days from the day on which the date of production of the document has been written down on the cover of the document, and the date of confirmation thereof must be affixed on the part sealed.

Article 1070 (Will by Instrument of Dictation)

(1) In order to make a will by an instrument of dictation where a will is not able to be made in compliance with the forms mentioned in the preceding four Articles due to disease or any other cause imminent, the testator must orally declare the tenor of his will to one of the witnesses in the presence of at least two witnesses, and the person to whom the oral declaration is made must write it down and read it, and the testator and each witness, after their having acknowledged the writing to be due and correct, must affix their signature and seal thereto.

(2) A will made in compliance with the form mentioned in paragraph (1) must be submitted to the court for its inspection and approval thereof by the witness or the persons interested within seven days from the day on which such imminent cause terminates.

(3) The provisions of Article 1063 (2) shall not apply to a will to be made by an instrument of dictation.

Article 1071 (Conversion of Will made by Secret Document)

If a will which has been made by a secret document is defective as to formalities, he shall be deemed as a holograph will if he fulfills the formalities of a holograph document.

Accordingly, the Korean Civil Law only recognizes the 5 forms of will, the detailed description of which can be found in the respective article above.

If a foreigner resides in Korea at the moment of death of will’s creation, or else if the property to be inherited owned by the foreigner is a real estate property in Korea, such a foreigner has to comply with the Korean Civil Act when composing one of the 5 forms of wills above, otherwise such a document will be considered invalid on the territory of Korea, which may lead to the intention of that person to pass on his or her property to the beloved ones being ignored. This is something that those who reside or own property in Korea should be exceptionally careful about.

Next in our series – the inheritance law of Korea. Stay tuned! 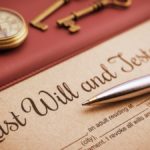