Accusation of injury by rape

The foreign client of Pureum Law Office (PLO) met with a South Korean girl several times and had sexual intercourse with her. However, after the client refused to pursue a relationship with the girl, she claimed that our client passed along a sexually-transmitted disease (STD) and filed a criminal complaint against him for injury by rape. After this, she threatened our client, demanding that he compensate her with several hundred million Korean won (KRW) and that he would be deported from South Korea.

PLO offered a comprehensive analysis of the client’s current situation, explaining that as long as any sexual intercourse had been consensual, there could be no claims of rape. In addition, since there was no intention to transmit an STD, there could also be no claim of injury by rape. We explained that under the worse-case scenario, the incident would correspond to a crime of injury by negligence, the statutory punishment for which could not exceed 5,000,000 KRW.

The other party requested tens of millions of Korean won in compensation, but PLO advised our client that there was no need to respond to this settlement request.

PLO defended our client during the investigation process and had all charges of injury by rape dropped, by claiming that the: 1) intercourse was consensual; and 2) other party’s STD was different from that of our client.

The charge against our client was eventually dropped and he still resides in South Korea.

In a sex crime case, when the only evidence is the victim’s statement, it is possible to avoid a false accusation of a sex crime by challenging the victim’s claims as much as possible and actively asserting that the sexual intercourse between the two parties was consensual.

Especially in the case of foreigners, even if such a foreigner is only ordered to pay a fine after having been convicted of the sex crime, the foreigner will unconditionally be deported, so when it is clear that you did not commit the crime, it is imperative that you do not make a settlement with the victim and that you claim your innocence until the end so that charges against you get dropped.

Local lawyers might not know South Korea’s Immigration Act well, and they might advise their client to make a settlement with the victim in the case of a minor sexual offense (indecent act by compulsion, etc.) because the offender then only receives a fine. However, we should remember that if a foreigner follows such advice and settles the case with their victim, and even if the criminal case is resolved amicably, that foreigner could still receive a departure order following a review of their case by South Korean immigration authorities.

Thanks for reading our post on Accusation of injury by rape, please see more of our cases and other useful tips or reach out to us if you’re in need of legal assistance in Seoul or anywhere else in South Korea. 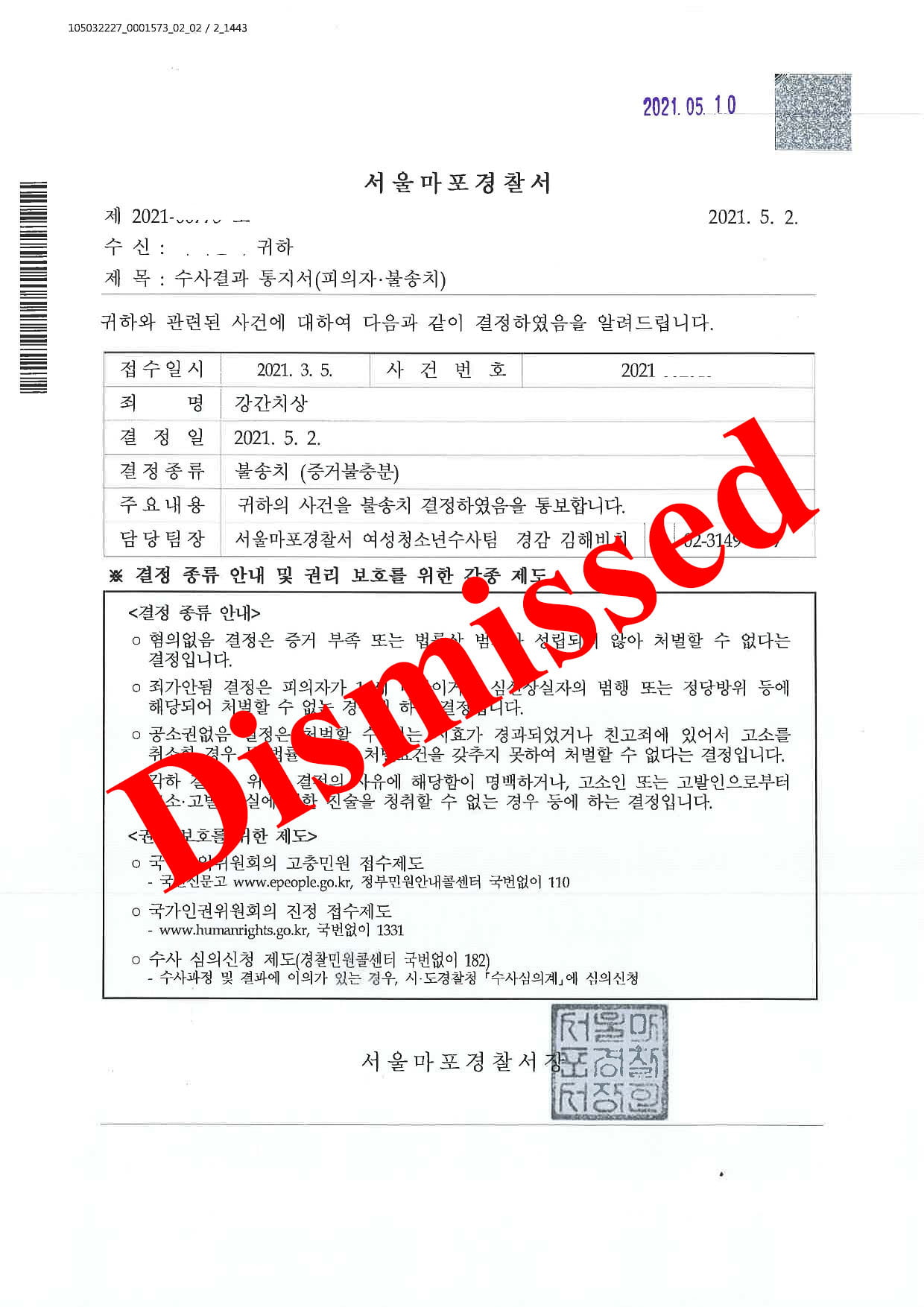